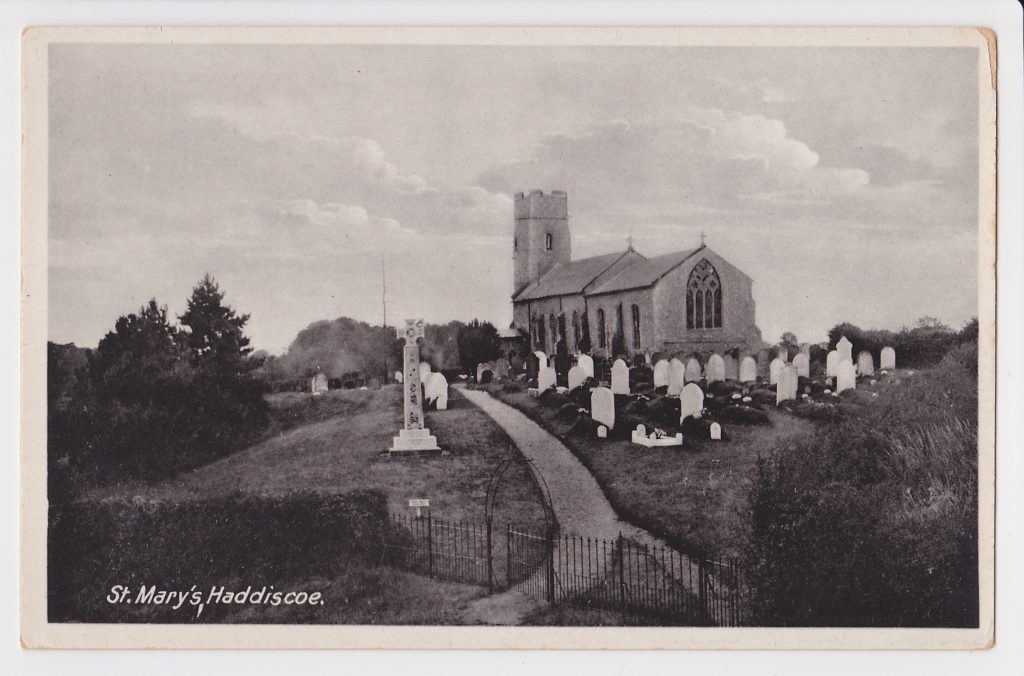 Haddiscoe is a village and civil parish in the South Norfolk district of Norfolk, England, about 16 miles (26 km) southeast of Norwich. The parish is on the county boundary with Suffolk, about 7 miles (11 km) west-northwest of Lowestoft. The parish includes the hamlet of Thorpe-next-Haddiscoe, about 1 mile (1.6 km) north of Haddiscoe village.

The Domesday Book of 1086 records the toponym as Hadescou. An entry for 1208 in the feet of fines and one for 1236 in the Book of Fees each record it as Hadesco. A Close Roll dated 1253 records it as Haddesco.

The toponym is derived from Old Norse. “Hadd” was someone’s name, and the second part of the word is derived from the Norse word skōgr meaning “wood”, so the place was “Hadd’s wood”.

Haddiscoe was the site of Norfolk’s only Knights Templar preceptory. It was dissolved in the 14th Century.

The Haddiscoe Hoard, the largest hoard of English Civil War coins found in Norfolk to date, was found on 17 July 2003 by a workman on a flood defence scheme.

Under the Poor Law Amendment Act 1834 Haddiscoe was in the Loddon and Clavering Union.

A railway linking Reedham and Lowestoft was authorised in 1845 and opened by the Norfolk Railway in 1847. It passes through Haddiscoe parish, partly alongside the Haddiscoe Cut. The original Haddiscoe railway station was opened to serve it.

In 1862 the Norfolk Railway became part of the Great Eastern Railway, which in 1904 replaced the original Haddiscoe railway station with the present one. It is about 1 1⁄2 miles (2.4 km) from the centre of the village and is served by Wherry Lines trains linking Norwich and Lowestoft.

A stray V-1 flying bomb fell in Haddiscoe in the Second World War.